Assuring Success for Leaders and the Organizations they Serve

“The trouble with the world is that the stupid are cocksure and the intelligent are full of doubt.” – Bertrand Russell

Have you ever known someone who was so very uninformed, did very dumb things, acted just plain stupid, but yet THOUGHT they were super smart? Come to find out, and my experience bears this out, the dumber someone is, the smarter they think they are. Conversely,  the smarter one is, the less confidence they have in their intelligence.  They’ve even done some scientific studies that prove the point. and it has a name: The Dunning-Kruger Effect. Sufferers have what has been called illusory superiority, where people overestimate their positive qualities and underestimate their negative qualities relative to others. I guess the corollary is illusory inferiority.

What I would have labeled as false modesty for intelligent people, is actually a psychological fact. This has fascinated me since I first heard about Dunning and Kruger’s Cornell University study a decade ago. The theory has many applications beyond simple wisdom and ignorance.  Take ethics, for example.

The ethical theory of Moral Imagination, simply stated, is that one must first develop a moral imagination in order to truly understand the ethical decision-making process well enough to make 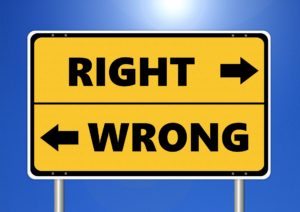 the right decisions. It’s kind of like exercising – but for one’s ethics muscles instead of the b

iceps. The various ethics theorists agree that ethical orientations develop along a continuum, from very basic understanding of a thing as right or wrong, to quite advanced reasoning and understanding. (see Werhane, P.H.)

I find it quite interesting that a person who is at a lower stage of ethical development cannot understand the reasoning of someone operating at much higher stages (one above and one below is the generally accepted rule of thumb). Lawrence Kohlberg came up with a theory of Moral Development, and made the same conclusions. The same holds true for various stages of cognitive development in adults.  It makes sense. You cannot relate to or understand something if you have not developed the imagination or cognitive experience that will open your mind to understand these different possibilities.

What does all this have to do with organizational leadership?  Well, nothing and everything.  If you want to relate to people you are trying to influence, whether it is employees, family members, or politicians, then you are wise to first understand their level of development. From there, you can craft your message to appeal to them at the level of development at which they are functioning, presumably with better results.

A program director I once supervised expressed her frustration with one of her employees, saying that everything she suggested was met with resistance and negativity. She would eventually come around, but she would first poison the discussion in team meetings. I pointed out to the director that the employee’s skill level was not highly developed and she simply needed time to process new ideas before embracing them. We decided that when the director was going to make a change or implement a new process, she would introduce the idea to this employee before discussing it with the team.  This negative, resistant employee soon became the director’s champion for implementing new ideas into the department.  Both the director and the employee grew with this new approach, raising their own development stages a notch or two in the process. And the department’s performance improved, too.

So, next time you are wondering about someone’s decision-making wisdom, consider the stage of development they are demonstrating.  They may just not be as smart as they think they are.

Note: A version of this post was written and posted on the personal blog of Leadership Bridges founder, Florence Tandy, and can be found here: https://florencetandy.com/2010/12/31/the-more-you-know/